This past week, The Gospel Coalition ran a short post of mine on Jesus’ difficult teaching about how we will not be married in heaven. 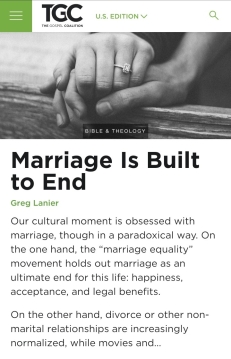 The editors originally reached out to me to speak to this particular topic, as it is a hard truth for many. For those who are happily married, there is some large measure of sadness in the fact that you will not be married on the other side of the resurrection. How can that be better?

27 There came to him some Sadducees, those who deny that there is a resurrection, 28 and they asked him a question, saying, “Teacher, Moses wrote for us that if a man’s brother dies, having a wife but no children, the man must take the widow and raise up offspring for his brother. 29 Now there were seven brothers. The first took a wife, and died without children. 30 And the second 31 and the third took her, and likewise all seven left no children and died. 32 Afterward the woman also died. 33 In the resurrection, therefore, whose wife will the woman be? For the seven had her as wife.”

34 And Jesus said to them, “The sons of this age marry and are given in marriage, 35 but those who are considered worthy to attain to that age and to the resurrection from the dead neither marry nor are given in marriage, 36 for they cannot die anymore, because they are equal to angels and are sons of God, being sons of the resurrection. 37 But that the dead are raised, even Moses showed, in the passage about the bush, where he calls the Lord the God of Abraham and the God of Isaac and the God of Jacob. 38 Now he is not God of the dead, but of the living, for all live to him.” 39 Then some of the scribes answered, “Teacher, you have spoken well.” 40 For they no longer dared to ask him any question.

As I researched the passage, I realized that Jesus’ point is not primarily about this truth—though that is part of it. He’s mainly talking about two-age living, and understanding the difference between life in “this age” and life in “that age.” That shapes not only how we understand marriage (or singleness), but truly everything else.

2 thoughts on “On Marriage in Heaven (or the Lack Thereof)”