This evening, I gathered our children around for our Advent devotionals, and I began sharing some of the great stories of Jesus as a small boy in Nazareth. Pulling down one of the Jesus storybooks we have on the shelf, I began reading:

“When Jesus was six, he was playing with his cousin John and his half-brother James, who sort of resented him, and they began making mud pies in the back alley behind Joseph’s carpenter shop. Some poor peasants came walking by, and Jesus, taking pity upon them, spoke to the pies and transformed them into real beef pot pies. He then gave them to the peasants, who went away rejoicing and telling all their neighbors about the great things that had happened.”

“A few years later, Jesus was playing a game with his friends on the playground, and one of them stumbled over a rock on the edge of the field, fell into a crevasse, and was instantly bitten by a viper. The teachers could not figure out how to help him, as he was quickly dying, and Jesus calmly approached. ‘Oh you teachers of little faith. How long must I endure this school?’ And he spoke to the boy, and he was instantly healed. The classmates were amazed, but some of the jocks said, ‘He has a demon.'”

“When Mary heard all these things, she treasured them up in her heart.”

Then we sang a few Christmas carols and called it a night.

Apocryphal fiction with some semblance of truthiness

You just experienced exactly what Christian apocryphal gospels are like. As I mentioned in a prior post on the Early Christian bookshelf, after the final New Testament writings were composed (likely ending with the death of John), the early Christian groups began producing edifying religious works that took Bible stories and, in effect, ran with them. The phenomenon is not unlike the scores of people who have generated prequels and sequels to the Lord of the Rings trilogy (you can find hordes of that stuff on the internet).

The methodology is pretty straightforward, as my off-the-cuff examples above illustrate. When one knows the basic content of the gospels, it’s not too difficult to craft a story that picks up on themes (sometimes unintentionally), phrases, and ancillary details of the biblical narratives that sound on the surface “sort of biblical” until you realize they aren’t actually IN the Bible. For instance, my two stories, which are entirely made up out of my own head (in case you didn’t realize that), play on a variety of real elements in the gospels: John the Baptist as Jesus’ cousin, Jesus’ half-brother James, Joseph as carpenter, Jesus’ compassion for the poor, Jesus’ ability to transform one thing into another (e.g., water into wine, or multiplying loaves and fishes), the recurring theme of witnesses praising God after miracles, the viper bite (from Acts), Jesus’ calmness in the face of crisis (e.g., stilling the storm), “ye of little faith,” “how long must I endure” (this generation), Jesus’ ability to speak and accomplish miracles, Jesus’ many healings, and the accusations of Jesus having a demon.

By cloaking my made-up stories with real details pieced together from the gospel accounts, I was able very quickly to produce a pretty interesting couple of stories about Jesus’ childhood that, on the surface, have some “truthiness” (in the Stephen Colbert sense): they seem like something Jesus might have done. Of course, the problem is that there’s no basis in any real text for these events. So I could simply say that they are not meant to reflect historical reality, but rather serve as Christian fiction meant to teach a moral lesson or entertain fellow Christians if they’re looking for something wholesome to read on a Sabbath afternoon.

That, in a nutshell, is a lot like how apocryphal Christian writings work. There are a lot of these writings that have been discovered over time, dating from the second through fourth centuries. One of them is particularly interesting in light of the Christmas season.

The Infancy Gospel of Thomas: or, Jesus, Boy Wizard

One of the most widely circulated and well-known apocryphal works in the NT period is the Infancy Gospel of Thomas. It is dated to the mid to late 100s AD, and the fact that copies have been found in a variety of languages (Greek, Latin, Syriac) suggests that it was fairly popular. It is certainly an interesting work, as purports to tell a variety of stories about the miraculous deeds Jesus performed as a child.

Why would such a work be needed? A quick glance through the canonical gospels reveals that we only have a single data point about Jesus’ life between the visit of the Magi and the arrival of Jesus on the scene as a grown man: the story of Jesus at the temple at age 12, reported in Luke 2:41–52. That is the only detail about Jesus’ childhood that Matthew, Mark, Luke, and John (and even the non-canonical Gospel of Thomas) choose to report about Jesus. But wouldn’t it be really interesting to know what Jesus was like? Was he a good kid? Did he fall down and get hurt? Was he good at sports? Did he do any miracles?

In the void left by the canonical gospels, the Infancy Gospel of Thomas attempts to fill in those details.

What kind of portrait of Jesus emerges? Something like this:

The Infancy Gospel is notorious for portraying Jesus as, more or less, a boy wizard. It is the Harry Potter of early Christian apocrypha. Throughout the short work, Jesus is seen zapping friends, outsmarting his teachers, and in general being a bit of a smart-alecky, precocious wünderkid. Here are a few examples:

Apart from the attitude problem and the times when Jesus is depicted as doing really mean things to his classmates, some of the tales in the Infancy Gospel seem like something Jesus could or would have done, such as  healing his brother or raising someone from the dead. Not surprisingly, the work ends with a retelling of the trip of Mary, Joseph, and Jesus to the temple when he was 12, just as with Luke. So clearly the author is attempting to spin a yarn that would have been interesting to his readers, sounded sort of biblical, and has some connecting points with the actual gospels.

There are, of course, a host of reasons why no one actually took the Infancy Gospel to be a historical record. By the time of its composition, the fourfold gospel had been well-established among the churches. No church fathers ever mention that the Infancy Gospel was debated as possibly canonical and authoritative, and there is absolutely no evidence at all that it was ever taken seriously as God’s word; it had “truthiness” since it was borrowing from the actual gospels, but not truth itself. And, perhaps most importantly, John makes it quite clear that the first miracle of Jesus was at the wedding at Cana, thus precluding any historical veracity of the miracles reported in the Gospel of Thomas. It was, however, quite popular and probably entertaining, as if it were the Chronicles of Narnia or the Francine Rivers of the second and third centuries.

As is well-known, the Qur’an (the central religious text of Islam) makes numerous references to Jesus – approximately 15 suras (chapters) and 93 verses. The Qur’an affirms various historical facts about Jesus, such as his virgin birth, moral righteousness, reception of words from God, his status as “messiah,” and, notably, several of his miracles. Muhammad had access to at least some form of Christian gospels, which he could in turn use to reflect basic ideas about Jesus. But scholars have had a hard time figuring out what type of Christianity Muhammad encountered when he began his mission in the 600s. Were they Gnostic Basilideans, Nestorians, Julianists, Monophysites? How do we, for instance, account for the confusion in the Qur’an about the Trinity, whereby sura 4:171 appears to portray the Christian Trinity as consisting of God, Jesus, and … Mary?

One interesting data point may be found in a sura in which the Qur’an appears to be drawing upon the Infancy Gospel of Thomas, which would be the only known source for these verses in the Qur’an. 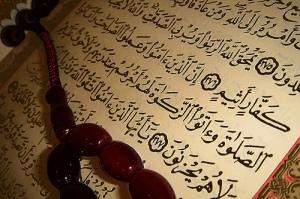 Qur’an 3:49 – I will make the shape of a bird for you out of clay, then breathe into it and, with God’s permission, it will become a real bird.

Inf Thom 1:2,4 – Then, taking soft clay from the mud, he formed twelve sparrows. …  But Jesus, clapping his hands, commanded the birds … And the sparrows, taking flight, went away squawking.

There is another similar “infancy gospel” of Jesus that is known from seventh century Arabic sources that contains an account of Jesus speaking to Mary while he was a baby in the cradle; this story is also picked up in the Qur’an 3:46 and 19:28–34.

So it is apparent that, while Muhammad had access to at least some trustworthy information about Jesus from the canonical gospels, he also mixed in apocryphal traditions.

Connecting to the pew

What should we make of a work like the Infancy Gospel of Thomas and others like it? Should we be offended? Should we pretend they’re not there? Should we burn them as heresies from the pit of hell? Should we run away from them and let “the liberals” mess with them at their own risk? In all seriousness, what is the appropriate Christian response to something like this? Let me suggest two takeaways:

Thus, in the next two weeks, as we meditate on the incarnation of the Son of God, let us not forget that the baby in the manger WAS (and IS) God himself. God took on flesh, in a baby boy, born in Bethlehem, to a real woman from Nazareth. And somehow, in that little seven or eight pound child, at that very moment, “in him all things hold together” (Col 1:17).

Many thanks to Warner Bros. for producing the Harry Potter movie artwork, and about a zillion websites that are probably improperly using said artwork.

One thought on “The Harry Potter Jesus”